Wireless Internet is becoming more and more predominant, so much so that it believe that hardwired Internet will become obsolete in the near future.

Ok, I admit, the title of this article may be misleading. These days, Internet access has so many different names, it’s hard to understand what the difference is. Although Wikipedia isn’t the most reliable source, this page contains some useful vocabulary: https://en.wikipedia.org/wiki/Internet_access .

What this article is actually referring to is “Hardwired Internet Access” and  “Wireless Internet Access”. Hence the name, hardwired uses wires or cables (DSL or Fiber) as opposed to wireless (WiFi and mobile networks).

Internet Service Providers (ISP) are well-known to rip their customers off with overpriced offers. Ridiculous data caps, inflexible bundled services, contracts binding you for years… you name it! And they are only able to get away with it because of their oligopoly of the market, as well as a very questionable regulation. It’s not surprising that the ISP “Comcast” is in the top most hated companies in the US.

Over the past year, I haven’t been subscribed to any ISP for hardwired Internet access. Instead, I have only been using my phone data and WiFi, and it has been well enough. How? By using the best mobile offer I’ve ever come across.

It’s no secret, Europe has the most affordable mobile broadbands. France however, only owes its position thanks to the operator “Free“. Back in 2012, they disrupted the market with unheard of cheap prices. Unlimited calls, SMS, MMS, and 3GB for 19,99€/mo and prepaid! Since then it has got better and better. End of 2013, they introduced the same offer, but this time with 20GB of data and on the LTE/4G network. This 4G network was quite controversial as Free’s coverage wasn’t all that good at the time. But for all the major cities, where coverage wasn’t an issue, it was extremely fast. Using SpeedTest, I reached over 90Mbps/sec in download, and 70Mbps/s in upload!

I couldn’t believe such amazing numbers. To put this in perspective, at the time I could get no more than 60Mbps/s download speed from fiber.

Free received a lot of hate and love for this brave move. Not all consumers that had been lured into their viral marketing campaigns were having the same results. Even the 20GB seemed over the top, people didn’t believe that anyone would reach such limits. Well, here’s a screenshot of the month I used the most data (18,57GB). 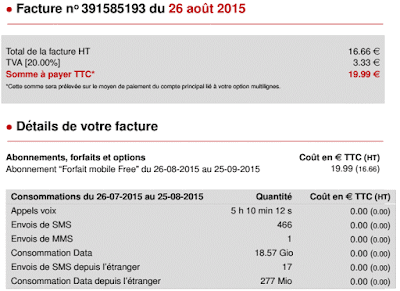 It is not only possible, but actually a challenge to keep it under 20GB. With my 90+ applications that need regular updating, my average of 40 photos per month backed up in the cloud, my web & social media browsing… It all adds up. But we’re still nowhere close to 20GB.

The vast majority is used via data tethering. With the insane bandwidth speeds, it was a natural substitute to my DSL Internet connection at home. Data tethering allows the user to share their phone’s internet connection with other devices. This is usually very easy to activate on most smartphones. Yes, with 20GB, you are definitely limited – yet it is quite enough! Most websites won’t eat that much data. From personal experience, if you were to avoid any videos online, I doubt you’d reach 20GB, even with heavy usage. That being said, I could watch at least 200 short high definition YouTube videos, and even stream 2 or 3 movies per month (less than 1GB/movie at 720p).

With the amount of time we spend on the Internet today, this would clearly not be enough for many people. But consider how many free WiFi hotspots are about in big cities, the Internet you have at work or school. It’s actually quite conceivable.

Where we stand today

This whole article was inspired by yet another announcement by Free, offering now 50GB, still at 19,99€/month. Wireless broadband keeps getting better as well: 5G network theoretical speeds put 4G to shame.

At this rate, I believe it is not too far fetched to predict the death of hardwired Internet in the future. However, it might take a long time to get there, mainly because ISPs do not want to update their obsolete infrastructures. Coverage is of course another problem. While 5G networks are being tested, most people merely have access to 3G networks. Only time will tell.